Posted by brian on Saturday, 08 September 2018 in Cruising News

As many Australian’s are aware Australia is in the middle of one of the worst droughts we have ever seen, channel nine’s today show and also channel sevens sunrise have even got right behind our farmers with raising much needed funds for those in need. Not only is there the financial toll that many of our struggling farmers feel up against it but there is also the emotional and physical toll that along with that as well.

That’s why rural aid has started a drought appeal called: Rural Aid's Buy-A-Bale drought appeal campaign.Below is some information about the Buy A Bale Campaign and Support of Rural Australia:

Rural Aid's Buy-A-Bale drought appeal campaign is providing meaningful support for farmers by delivering hay and other essential items to farmers who have no feed left for their cattle or sheep. All donations to the drought assistance campaign have a fourfold effect. Some hay is donated, some we buy, so we’re feeding a hay farmer and their family. Some of our truckies are donating their time and diesel, some loads we’re paying for, so we’re feeding truckies and their families. In the end we deliver relief to our farmers at no cost to them.

Australians, donating to Buy a Bale is helping not just farmers but their communities and so many more people. So thank you on behalf of our farmers for your support.

Not only is there the Rural Aid and its Buy-A-Bale campaign, there is also P&O Cruises Australia who have decided to help out and jump in and Work in conjunction with the charity.

P&O Cruises Australia has set aside 85 cabins across two separate four-night cruises to give hard-pressed farmers and their families a break from the crippling drought in New South Wales and Queensland.

The cruises — one from Sydney to Moreton Island and the other from Brisbane to the Whitsundays — are being offered in the face of the disastrous drought that has resulted in 100 per cent of New South Wales’ land area and nearly 60 per cent of Queensland’s land area being drought declared, with large sections described as being subject to ‘intense drought’ conditions. 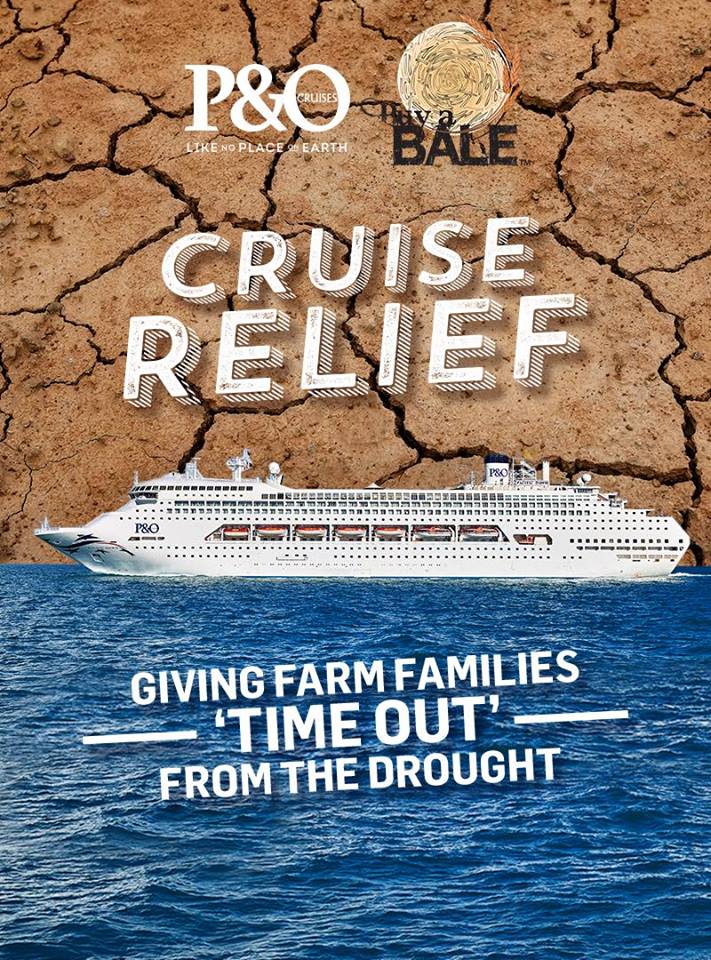 President P&O Cruises Australia Sture Myrmell spoke of the powerful impact of the drought on rural families and of Rural Aid's inspiring efforts to coordinate and deliver relief to people on the land including massive road convoys of trucks carrying badly needed feed to stricken livestock.

“We know from Rural Aid that the physical and emotional toll of such a severe and prolonged drought on rural communities is enormous and that many farmers have not had a break in years,” Mr Myrmell said.

“As much as everyone across Australia would like to, we cannot make it rain to break the drought but we can do what we can to give some farmers a welcome respite from the burden in the best way we know how by making cruise opportunities available.

“We are very proud to be working in partnership with such a widely respected organisation as Rural Aid and its Buy-A-Bale campaign to make this happen.”

Rural Aid is working with P&O Cruises to nominate farmers in New South Wales and Queensland who will sail on the cruises on Pacific Explorer and Pacific Dawn from Sydney and Brisbane on December 4 and December 10 respectively.

CEO Rural Aid Charles Alder said, “Whilst we're moving thousands of tonnes of hay for our farmers through our Buy A Bale program, this offer from P&O Cruises will equally bring mental relief to our farmers stressing about their animals but also their own situation.

“These cruises will provide a great opportunity to break out and relax. We've put the call out to our volunteer base with farm-sitting experience to help allow these farmers to get away and know their farms are in good hands.”