Posted by brian on Friday, 19 February 2016 in Cruising News

Ovation of the Seas is a step closer to completion, emerging from the dry dock and floating on water !

Ovation of the Seas, the third largest cruise ship in the world and the biggest, newest and most technologically advanced ship ever to call Australia home, has been floated out of the construction hall and into water at the Meyer Werft shipyard in Papenburg, Germany. 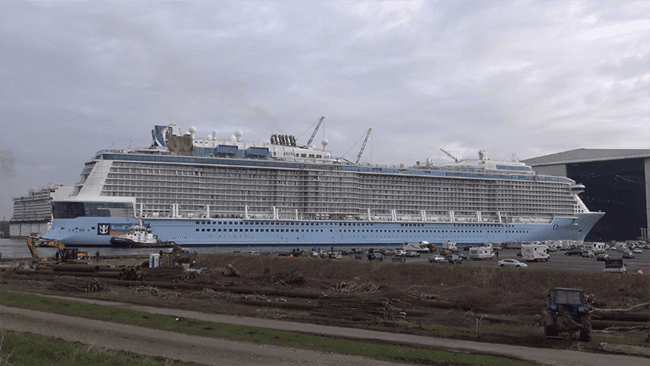 This major milestone signifies the ship has reached the final stages of construction – marking less than two months to completion and only 10 months until she arrives in Australia.  The 168,666-GRT megaliner has taken just 18 months of construction to reach this point.

Overnight, the shipyard’s sluice gates were opened and the dry dock commenced filling with water to float Ovation of the Seas out into the River Ems: a slow and careful process that takes up to 8 hours. Then during the day, tugboats maneuverer the ship to the shipyard’s outdoor berth where she will undergo further construction, including attaching masts and funnels and the installation of many of the furnishings.  A final dry-dock visit will see her propulsion parts installed.

“Today marks a truly momentous milestone in the Australian cruise industry: our first ever newbuild now floats on water for the very first time. In just 10 months she will call Sydney home and proudly claim the title of the newest, largest and most technologically advanced cruise ship to ever sail in our waters,” said Adam Armstrong, regional commercial director, Royal Caribbean.

“This is a significant day for both Royal Caribbean and for Australia, as we celebrate the birth of our new $1 billion baby. Ovation of the Seas has been purpose-built for the Asia-Pacific region and continues Royal Caribbean’s unique strategy of bringing the very best cruise ships to Australia. We’re extremely excited that she is now in the water and look forward to welcoming her to Sydney Harbour.”

When she debuts in April, Ovation of the Seas will claim the title of equal third largest cruise ship in the world – eclipsed only by Royal Caribbean’s twin ships Allure of the Seas and Oasis of the Seas.  She is the third ship in the ground-breaking Quantum Class and introduces a new set of first-at-sea onboard experiences to Australia including the Ripcord by iFLY, a heart-pounding skydiving experience; North Star, a thrilling adventure that will transport guests as high as the Sydney Harbour Bridge; cutting-edge transformative venues including SeaPlex, the largest indoor sports and entertainment complex at sea with bumper cars, a circus school and more; and the robotic Bionic Bar.

Ovation has also reimagined dining onboard with the introduction of “Dynamic Dining” where guests can choose from 18 unique restaurant concepts, including Jamie’s Italian, Michael’s Genuine Pub, the enchanting Wonderland and Royal Caribbean favourites including Chops Grille steakhouse and Izumi Japanese.

Technology has also been amped up on Ovation of the Seas with high speed internet offering more bandwidth so guests can connect and stream as quickly as they would onshore, while the Royal iQ app makes keeping track of your onboard schedule simple with all bookings and cruise details stored and updated automatically. 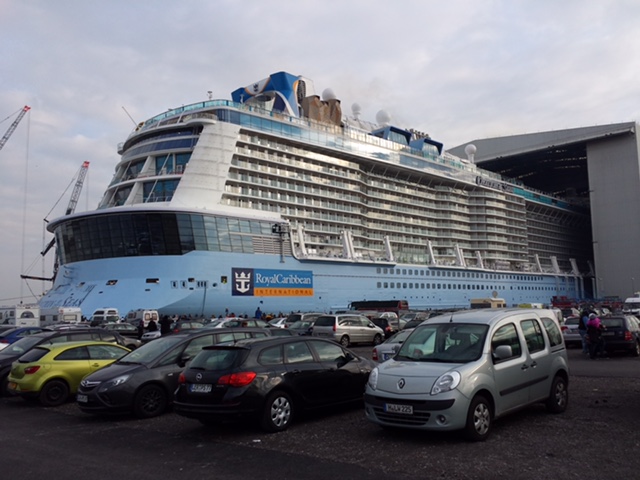 Ovation of the Seas will sail from Southampton in April before repositioning from Europe via Dubai and Singapore to arrive in Beijing (Tianjin) for her inaugural China season commencing 24 June 2016. On 30 November 2016, she will set sail on a 15-night Singapore to Sydney voyage via Fremantle, repositioning to her new home down under where she will offer three Australia and New Zealand cruises as well as a repositioning sailing on her return to Singapore, departing Sydney 23 January 2017.

For further information or to make a booking, visit www.ovationoftheseas.com.au, phone 1800 754 500 or see your local travel agent.