Posted by brian on Wednesday, 28 August 2013 in Reviews

Pacific Jewel Will Surprise You.

This lovely ship has quite a history.

The 70,310-ton, 1,950-passenger Pacific Jewel was originally built in 1990 and sailed as Crown Princess in the Princess Cruise Fleet. She was then moved on to the German based AIDA Cruises and sailed there as AIDAblu before moving to the now-defunct Ocean Village brand and sailing there as Ocean Village Two, before joining P&O Australia in 2009 as Pacific Jewel the sister ship to Pacific Dawn, which was known as Regal Princess from the Princess Cruises fleet.

Dining-wise, there are five eateries onboard Pacific Jewel. The Waterfront Restaurant is the main dining room, serving fresh Australian produce described as modern Australian.The line has also recruited the first ever celebrity chef, Luke Mangan, who will add his special touches to the menu in the Salt Grill restaurant, a steak and seafood venue that serves excellent modern food. La Luna offers Asian infusion cuisine at a very affordable price of $25.00 and is open for dinner.

There is a small cover charge for Salt Grill, $30.00 for lunch and $40.00 for dinner, which is absolutely worth it!. But make sure once onboard you reserve a table straight away, reservations are necessary as it books out early in the cruise. The ship also has The Grill, offering hamburgers, pizza, chicken wings and other items for a small fee, located on Deck 12 at the bow of the ship. There is also a New Zealand natural ice cream outlet with an abundance of flavours at very reasonable prices. 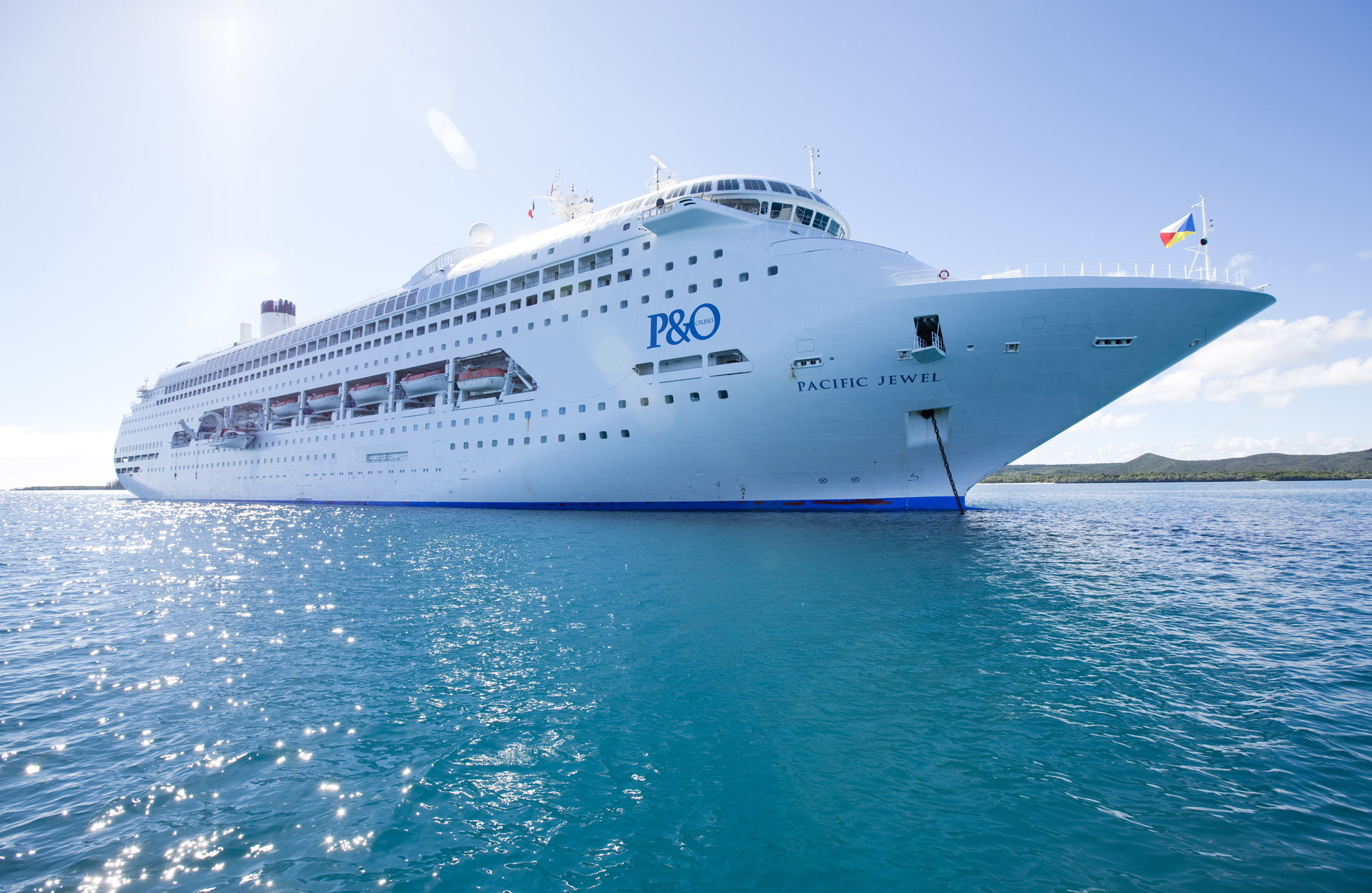 Chocolate lovers are in for a very special treat -- this ship has its own chocolate cafe onboard!. The cafe serves chocolate ravioli, warm chocolate fondant, Belgium waffles and a range of cookies and chocolate cake (all for an extra charge). There is also the Plantation, a self serve buffet at the AFT [stern] end of the ship on Deck 11, open for breakfast, lunch and dinner. Seating is limited here and there is a reasonable choice of food, although l do feel P&O Cruises could offer a better selection of food in this area.

Pacific Jewel has a trapeze arena on the top deck, located at the Marquee Theatre near the bow on Decks 7 and 8, and entertainment-wise, there is a 'Run Away to the Circus' production show which features life-size elephant puppets. I found this to be a great show and the children onboard absolutely loved it.

There is also a show called Do You Wanna Dance, and don’t forget the show SYZYGY on the open Deck 12 plus Transformation in the atrium, featuring some very talented performers.

My partner and l enjoyed back to back cruises on Pacific Jewel, the first one being the J316 Food & Wine Cruise to nowhere, with the second one the J317 Morton Island cruise, the island located just north of Brisbane in Queensland. When l first arrived at White Bay, the new cruise ship terminal, l was quite surprised at how easy check-in became. From start to finish, it had only taken 10 minutes andwe were soon walking across the new aero bridge to our cruise ship home for the next seven days. On the first night we went to the Waterfront Restaurant and enjoyed some great food, eating at the main restaurant onboard throughout the voyage, except for the couple of nights we ate at Salt Grill.

Following our evening meal we sat back for the first show, and enjoyed listening to Adam Scicluna who has a wonderful voice and is a great entertainer. I first saw Adam back on the Pacific Pearl last year and couldn’t wait to see his show again! We then stayed for the late night comedy of Mad Mike Bennett, who l have to say is one of the best comedians out there. He had us both in raptures of laughter. With the food and wine cruises you can choose to do it all or you can realax and do nothing.

The ‘Pacific Daily’ is delivered to your stateroom every evening, giving you plenty of choice options for the following day and evening. These range from: Live culinary demos, snowball jackpot bingo, morning trivia, golf putting competions, ice carving demostrations, wine tasting, cocktail & martini demostrations and tastings - even at midday!. This is just a short list of what you can do and you only have to pay a small fee to participate in some of these activities.

The night time activities includes a formal evening where everyone dresses up to the nines; to my surprise even the guys seem to make an effort and the ladies simply look stunning. This is the time you can have that special photo taken with your loved one, or with the group of family or friends who have accompanied you on the cruise.

Two shows are included every night, one at 7.30pm for the late sitting diners and the other at 9.30pm for the early sitting diners, and there’s always something happening in the Casbah located on Deck 7, or Connections located on the same deck, or The Atrium located on Decks 5,6 & 7 in the centre of the ship. And…we mustn’t forget the late night movies that can be seen at The Attic nightclub located on Deck 14 on the starboard side at the bow of the ship. After all this entertainment the time has come to head for our cabin and some welcome sleep. Here on Pacific Jewel there are 812 cabins, 198 of which have balconies, 628 with an outside view, and 197 inside cabins.

Pacific Jewel is marketed for Australian cruise lovers, sailing roundtrip cruises from Sydney to the South Pacific and New Zealand year round, also offering three to four night cruises ranging from cruises to nowhere, comedy cruises, food and wine cruises and lifestyle cruises. Or, you can also cruise to the popular destination of Morton Island, Queensland. One of the most popular cruises takes in the Melbourne Cup, and wait for it - next year P&O Cruises Australia will have three ships in Sydney Harbour for the spectacular Australia Day festivities next year!

‘Cruise The Seas Travel And Media, Shipmateapp Australia’travelled aboard Pacific Jewel as a paying passenger and were granted access to areas that are not available to other passengers. We were able to interview the Hotel Director Andrew Spencer and Cruise Director Paul to ask questions listed below.

Q: Where do the staff undertake their training - Indonesia? The same as MSC staff?

A: Staff do there training in the Philippines.

Q: How many nationalities work onboard the ship ?

Q: How often does the menu change onboard the ship ?

A: Every 16 days it changes through a cycle.

Q: Talking to many passengers on the two cruises that l have done, can you explain why is there are a number of first time cruisers?.

Cruise The Seas Travel And Media , Shipmateapp Australia would also like to thank the following :

During Sailaway we were handed a radio from the bridge and could listen to everything that was happening and we considered that a real privilege.

For all the assistance that you gave me onboard, helping me with any enquires that l had, as well as arranging the Private Bridge and Galley tours.

For the assistance you gave me onboard and for those questions that l asked of you both, which you answered without hesitation.

Executive Chef M.V. Pacific Jewel, for allowing us access to your galley when you were busy preparing lunch on a sea day and for answering the questions l had for you. It would not have been easy.

This Review of Pacific Jewel was written by :