Posted by brian on Wednesday, 10 October 2018 in Cruising News

The Historic Photo That Reveals The P&O Liner That Gave Birth To Modern Day Cruising In Brisbane!

The Historic Photo That Reveals The P&O Cruise Liner That Gave Birth to Modern Day Cruising In Brisbane!

With a new international cruise terminal in progress, an historic photograph of the first cruise ship to visit Brisbane has been revealed connecting P&O Cruises and the city to a proud heritage of more than 85 years of cruising.

Held in the archives of the State Library of Queensland, the old black and white photograph shows the 22,300-tonne mail steamer Strathaird drawing away from the wharf that is still used by the line’s gleaming ships.

A new bow-on photograph of the 70,000-tonne superliner, Pacific Dawn, departing from the same wharf has recreated the 1930s departure moment.

In December 1932, Strathaird sailed from Sydney to Brisbane and then to Norfolk Island marking the birth of Australian cruising with Brisbane remaining a key cruising hub for Australia’s home-grown cruise line.

Pacific Dawn has been home ported in Brisbane since December 2009 and has helped lead Queensland’s emergence as a major cruise source market in its own right with more cruise destinations than any other Australian state.

“Queensland is a growing cruise market but for P&O Cruises it is so much more based on the line’s more than 85 years of cruising and a relationship that continues to grow in depth and importance,” said Sture Myrmell, President of Carnival Australia and P&O Cruises.

“We see Queensland as a heartland state which this year will account for more than 220,000 P&O guests, a record 56 separate itineraries and the purchase of huge quantities of produce from Queensland suppliers.

“A relationship that began with Strathaird’s first cruise call back in 1932 continues to go from strength to strength.”

In 2017-18, P&O Cruises purchased more than one million kilograms of Queensland produce to replenish its fleet across Australia. Brisbane-based ships took on 124,000 litres of fresh milk and 2.1 million eggs. 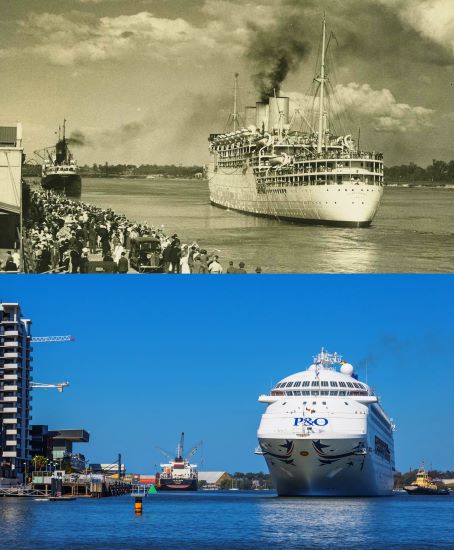 Nearly three quarters of the one million guests have sailed from Brisbane on Pacific Dawn and more than half of this number travelled on South Pacific itineraries.

Mr Myrmell said Brisbane would continue to grow as a major domestic and international cruise hub.

“The discovery of the 1930s Strathaird photo shows just how far P&O Cruises and Queensland have come in the growth of cruise tourism over more than 85 years of achievement,” Mr Myrmell said.