Posted by brian on Monday, 22 February 2016 in Cruising News

CUNARDS LINE'S MAGNIFICANT QUEEN ELIZABETH STEALS THE LIMELIGHT WHEN SAILING INTO NEWCASTLE FOR HER MAIDEN VISIT.

Cunard Line’s Magnificant Queen Elizabeth Steals The Limelight When Sailing Into Newcastle For Her Maiden Visit.

Queen Elizabeth – the youngest of Cunard Line’s three magnificent Queens – sailed into Newcastle today on her maiden visit to a booming three-gun salute from the city’s historic Fort Scratchley. The ship’s 2000 passengers – including more than 1100 Australian and New Zealander guests – and the entire ship’s company received the warmest of Novocastrian welcomes with a civic welcome hosted by Lord Mayor Nuatali Nelmes.

With a special honour guard from RAAF Williamtown harking back to Cunard’s historic connections to the Hunter, Cr Nelmes presented Queen Elizabeth’s Hotel General Manager Naomi McFerran with the ‘Key to the City’ of Newcastle.

“I am delighted to welcome Queen Elizabeth and the Key to the City on a day that celebrates Newcastle's bright future and proud maritime past," Cr Nelmes said. "Cruise ships bring more than 18,000 visitors to Newcastle each year, delivering international and domestic visitors to our pristine beaches and cultural attractions and generating around $11 million for the local economy,” she said. "We hope the guests on board Queen Elizabeth have a great time as they enjoy historical walks of the city, tour the Hunter Valley vineyards and enjoy dolphin-watching tours in Port Stephens.” 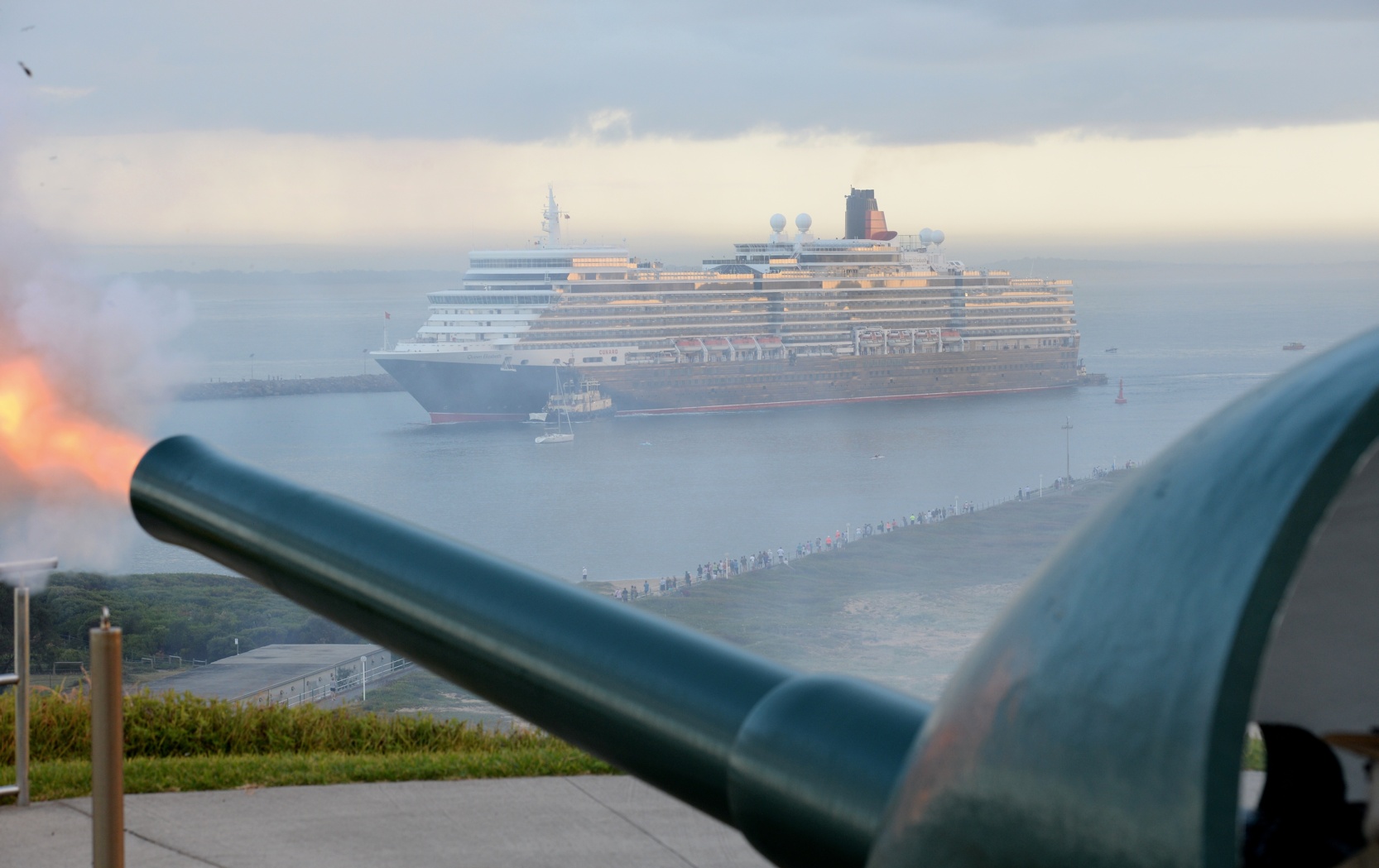 “Today’s visit alone will inject around half a million dollars into the local economy so it’s great to see a region like Newcastle benefit from the remarkable growth of cruise tourism,” Ms Sherry said. 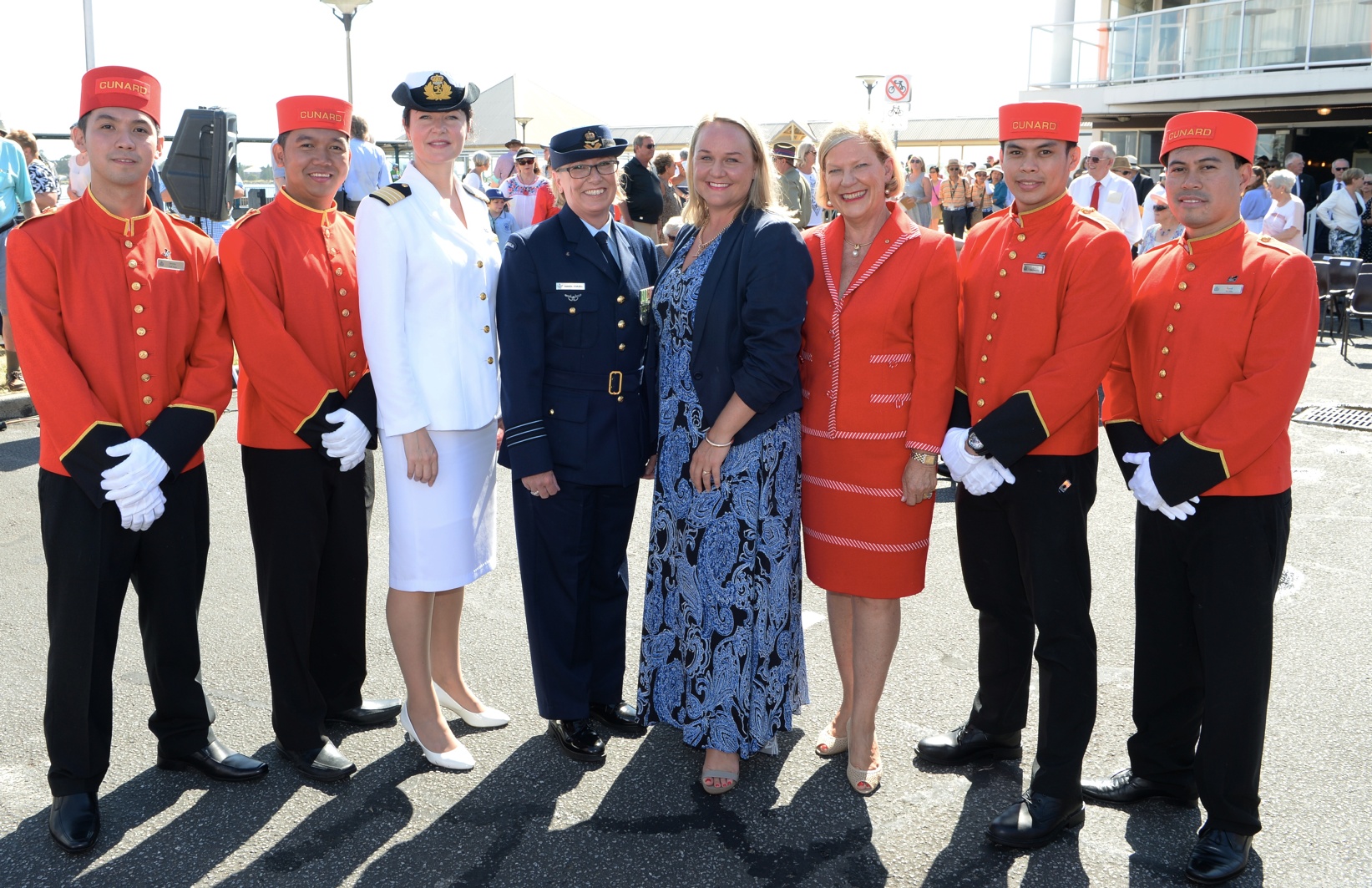 Queen Elizabeth’s Captain Alastair Clark said maiden visits to new destinations were always special and thanked Newcastle for the warmth of the community’s welcome, which also highlighted the ship’s wartime connection to the Hunter when airmen from 450 RAAF Squadron based at Williamtown sailed from Sydney in April 1941 for the Middle East on the original Queen Elizabeth. A commemorative service for 450 Squadron was held onboard Queen Elizabeth during its day in Newcastle.

“Maiden visits are always special occasions on our world voyages and Queen Elizabeth's visit to Newcastle has been eagerly anticipated,” Captain Clark said.

“We have been simply overwhelmed by the warmth of the welcome in particular the singular honour of being presented with the key to the city of Newcastle.

“As our guests return to the ship later in the day I am looking forward to speaking to them about all the exciting things they have seen and done during their stay in Newcastle,” he said.

Built at an estimated total cost of more than US$630 million, Queen Elizabeth is the second largest Cunarder to sail the world’s oceans. Launched in the United Kingdom in October 2010 by Her Majesty The Queen, Queen Elizabeth pays homage to Cunard’s original Queen Elizabeth, offering a raft of famous Cunard hallmarks plus some new ones.

Her many features include more than 700 private balcony staterooms, more than 10 restaurants and cafes and a Games Deck featuring paddle tennis, croquet and bowls. Queen Elizabeth also offers a two-storey library complete with a unique leaded glass ceiling and around 6000 books, as well as a two-storey Queen’s Room ballroom and a three-deck Royal Court Theatre seating 800 guests and offering private boxes.

Queen Elizabeth will return to Australia in 2017, with her 120-night world voyage including a Royal Rendezvous with big sister Queen Mary 2 during the liners’ visit to Sydney on February 25.  While in Australia, the liner will remain overnight in Sydney (February 25-26) and also call at Brisbane (February 28) and Yorkey’s Knob off Cairns (March 3).

A video of Queen Elizabeth’s arrival in Newcastle is available here: https://www.dropbox.com/sh/jcvs2e4gq5og44b/AAAF8KPPQuDU0XM-W5ItpPlAa?dl=0