Posted by brian on Tuesday, 10 January 2017 in Cruising News

EXTRAORDINARY PAINTING OF OVATION OF THE SEAS HANDED TO CAPTAIN HENRIK LOY IN 'GIVING BACK' CEREMONY !

Extraordinary Painting Of Ovation Of The Seas Handed To Captain Henrik Loy In 'Giving Back' Ceremony !

While On Board Ovation Of The Seas on Tuesday the 09th of January 2017, www.australiancruisingnews.com.au  was invited to a ‘giving back’ceremony.

Stan Stefaniak who is a marine artist presented Ovation Of The Seas Captain Henrik Loy with an original painting of the ship.

The tradition for Royal Caribbean International and Stan first started back to 2011.

2011 was the first time that Radiance of the Seas have ever visited Sydney and yesterday marked the fifth occasion where such a commission of such a painting Stefaniak had received.

Born in Sydney, Stan’s passion for painting maritime scenes stems from virtually a lifelong interest in shipping. The 1960’s and early 1970’s were years of fondly remembered countless ship visits after school in the port of Sydney, full of shipping activities with vessels belonging to numerous companies and countries of registry.

From a very early age Stan developed a love of drawing and painting, but it was his love of ships that inspired him to paint maritime subjects. Stan’s enrolment in art classes at the Ross Davis painting studio in Sydney for a few years had developed his understanding of the use of colour which he expressively uses in his paintings. 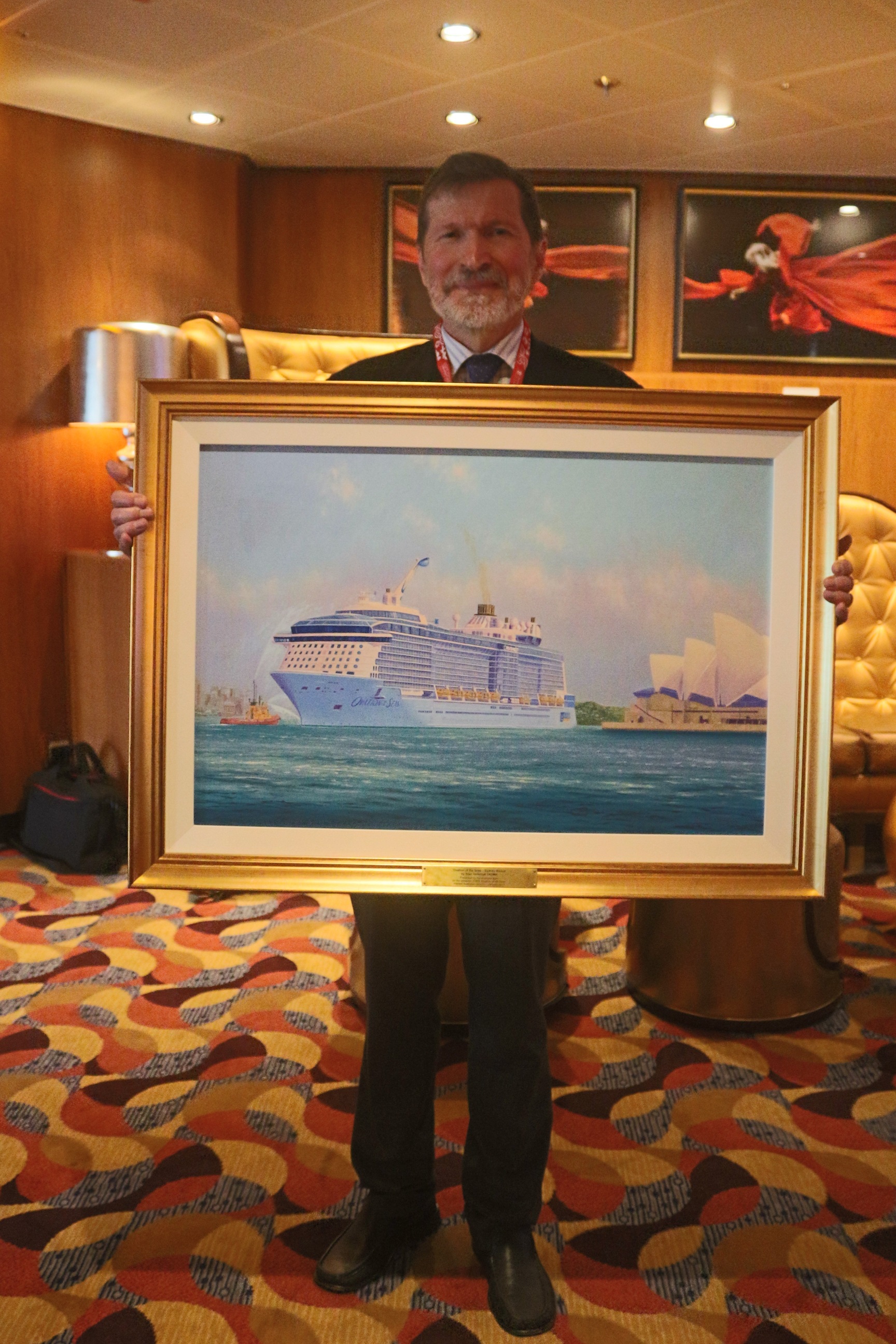 Several of Stan’s paintings have been used to illustrate covers for books about Australian and New Zealand shipping written by the well-known maritime historian Peter Plowman. His paintings are included in private collections in Australia and the United Kingdom, Royal Caribbean International Cruise Line, as well as on display in the Member’s Lounge at the Australian National Maritime Museum.

Adam Armstrong managing director for Royal Caribbean International for Australia and New Zealand said yesterday that a lot of VIP'S, Media, and Travel Agents had been thrown at Ovation Of The Seas for her inaugral season in Australia.

Adam said that extraordinary gift that Stan has spent putting many man hours into, infact over two weeks painting honours the captain and crew aboard each of ships that have visited Australia, it's sign of gratitude from the local Royal Caribbean team for all the hard work that the captain and his crew have done. 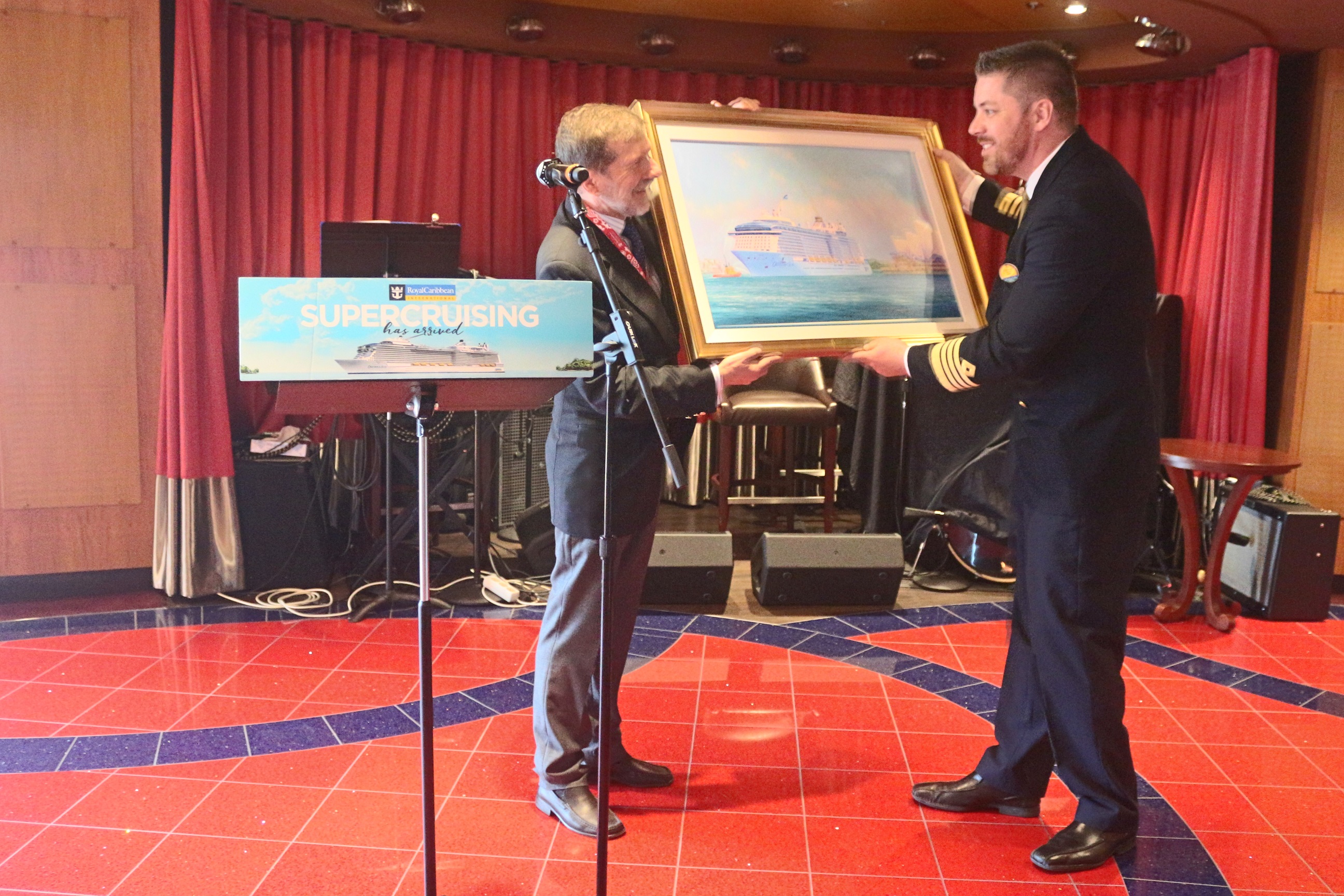 A spokesperson for Royal Caribbean International has informed www.australiancruisingnews.com.au  that bookings for Ovation Of The Seas local sailings have been sailing at full capacity. A number of her up and coming sailings are completly sold out including both of Ovation Of The Seas five and eight night sailings to Tasmania.

Ovation Of The Seas carries over 4,900 guests on each departure from Sydney, Australia  with 85- 90% coming from the ever so popular Australian cruising market which is set to grow even further in the coming years.